You are here: Home / Chipping / 4 of the Most Common Mistakes in Chipping

And How to Fix Them

Poor results on the golf course don’t happen on their own without some help. When you skull a chip shot that goes running across the green, or stub a shot, it usually happens for one of the following reasons, and knowing them will help you avoid them, for example…

Standing Too Far Away From the Ball

If you get your body too far away from the ball, then you must stick your arms out toward the ball. Any time you feel you are extending your arms “out” toward the ball, you could be in trouble. The one exception to this is if you’re using the one plane swing, which is my choice. Other than that, it’s going to create tension and you don’t want that.

Tension will block you from feeling the weight of the clubhead, and having a good sense of the clubhead is vital to having good touch and rhythm on your chip shots.

Another reason you don’t want to stand too far away from the ball is that the second you move the clubhead it will swing immediately to the inside and off the target line. When you are chipping you want the club to move straight back and through along the target line. One key to remember is maintaining a consistent spine angle in your setup.

This allows the ability to rotate through the ball on the same swing plane. When the club moves inside (or outside) the target line, you’re going to have trouble making clean contact and keeping the shot on line.

Using a Club with Too Much Loft

A chip shot is a running shot. Everything you do in your setup is designed to push the ball forward at a low trajectory. If you consistently come up short of your target, try using less-lofted clubs, before making the decision of experimenting with a different swing.

Opening Your Shoulders In Relation To the Target Line

If you remember proper form on most chip shots you should be opening up your feet and hips, but most importantly – keep your shoulders square. If you open your shoulders too, you’ll probably yank the chip to the left of your target. Think about your setup before striking the ball. Lower body slightly left upper torso and shoulders square to your intended line of the chip. Visualize first… every time you hit any golf shot.

Playing the Ball Too Forward In Your Stance

This final tip is a killer, and also the most common mistake golfers make on the course. Getting the ball too far forward in your stance almost guarantees that you’re going to catch the ball when the club is swinging up rather than down.

And when you hit the ball when the club is swinging up, chances are you’re going to catch the middle portion of the ball with the lead edge of the clubface. So if you’re consistently blading your chip shots across the green, check your ball position. It’s the most likely culprit. I suggest using the right hand and arms length in the setup. If you take your grip and extend your trailing arm forward and the club has not reached the back of the ball comfortably, the ball is too far forward.

Chipping is more about your setup and what feels comfortable to you. If you’re right handed, place the club down behind the ball more to the right side of your right foot. This simplifies the setup by minimizing the amount of body movements during the setup. This tip will also improve your alignment and build confidence in knowing where your ball is headed before you swing, providing you learn to separate the lower half of your body left (open) and the upper body and shoulders square to your target line.

Enjoy your day and share my tips with your friends… 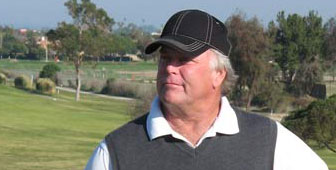 Get 7 Free Golf Lessons delivered weekly to your inbox. PLUS you get updates and special discount offers on golf each time we publish.

Join over 139,000 golfers who get free tips and updates delivered each time we publish.